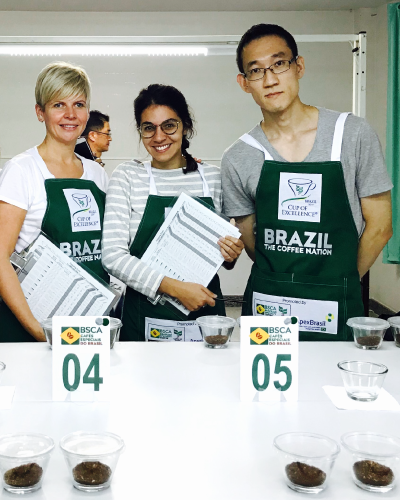 Every year competitions occur around the world, for baristas, roasters and also producers. This year, it was in Brazil that we makes you discover the best coffees in this country. And guess what? The producer with whom Belco is a partner has won the competition on natural coffees! Gabriela Parfait explains us all of this in her article.

Brief history of the Cup of Excellence

The Cup of Excellence is the first large-scale international competition in the world of specialty coffees. It is also one of the most prestigious, giving awards to the best coffees produced in a country according to the quality of cup. Since its first edition back in 1999, the famous contest has come a long way in its 18 years and has changed the destiny of a wide range of producers who have often become well-known on the international level. The CoE has created legends, changed mentalities and continues to bring together two worlds which are physically so far removed: the producer from the equatorial belt and European, Asian or American buyers.

And what has this maturity added to the CoE?

Over the years we have had to deal with a constantly changing market. Created when the second wave of coffee was just beginning to peter out, the timing was perfect to accompany the birth of the third wave and act as a catalyst for this movement. In its 18th year, the CoE has come full circle, calling time on its youth, today demonstrating its maturity, as the first edition was also held in Brazil. In the past, two competitions were organised: a competition for natural coffees and a separate competition for Pulped Natural coffees. Last year, the two contests were organised for the first time as one single event. There are numerous reasons for combining the two competitions into one which are not limited to practical and financial ones. Of course, it is less expensive to organise just one contest (time, resources etc...) but if this couldn't be done in the past it was because natural coffees were always massively under-rated. Fermentation used to be a swear word. We were looking for clean and clear coffees. Today, coffee cuppers are more inquisitive and always looking for new profiles and sensations. Natural coffees have enhanced the world of coffee and now draw further comparisons with the world of wine where we talk about fermentation and access a wider range of aromas. During this edition, natural coffees were been given top billing with scores over 90 points. Furthermore, the most prestigious winner, the “Presidential” coffee, comes from a biodynamic farm (Fazenda Camocim) which took first prize which a natural coffee lot. (see ranking) Natural coffee is fascinating. It arouses debate more easily since we want it to be explosive, expressive and highly fruity. Palates have become used to red fruits and exotic fruits. Depending on the degree of fermentation, the profile in the cup will follow a scale as follows:

A consensus on natural coffees

As part of the Cup of excellence, we look for something highly explosive but which doesn't go overboard or go as far as being “acetic”. The term 'funky' is hot right now and means a coffee which is not necessarily clean but whose intense aromatic intensity is surprising. It is a little sharp, surprising and leaves an unforgettable fruity taste in our mouth. If roasters have taken this term and run with it, the line between 'absolutely amazing' and 'defective' seems a little blurred, since individual perception and the culture of each person cupping come into play, making the whole thing rather subjective. Ultimately 'funky' combines both the best and the worst. By way of example, an Asian cupper, much more accustomed to fermented tastes, will tolerate the fermented notes of a coffee much more easily and will tend to score it more highly, whilst European cuppers will tend to rate it as defective. Fortunately, there is a general consensus on the best lots... so much the better !

In Brazil, producers have fully understood that they need to offer increasingly surprising coffees. Well known for their chocolaty profile with sweet acidity, Brazilian coffees must today rise to the challenge to prove to the world that it can produce exceptional and surprising coffees. Always at the cutting edge of agricultural technology, researchers and producers have begun to explore the use of various yeasts (baker's yeast, wine-making yeast etc...) in the coffee fermentation process, irrespective of the processing method selected. From the first results it would appear that it is possible to increase a coffee's score by 3 or 4 points by adding yeast. Brazilian coffees are proudly exposing the results of their research to split public opinion. Is it cheating or progress in a developing sector? This reminds me that in Africa and more particularly in Ethiopia, producers don't have access to the same means, despite boasting some of the best coffees in the world. Perhaps because they have access to production methods closer to small scale farming endemic in coffee, or perhaps due to the richer soils they have, which undoubtedly influence the taste of the fruit. Other simpler lines of thought also exist. And this CoE discretely demonstrates this: a first prize award to a biodynamic farm may support this theory. Furthermore, the number of prizes awarded to biodynamic farms beat all records this year. Things are constantly changing and the CoE will never cease to surprise us.


The presence of so many participants who farm biodynamically was the first shock, as organic has often been viewed as a parallel trend. We then had an inversion of trends since Espirito Santo, historically a producer of Pulped Natural (PN) coffees, won the competition with a natural coffee. And the Minas Gerais, a temple of natural coffee, won second prize with a PN coffee. Brazilian coffee is reinventing itself and we are sure to witness a revolution in the customs and practices of this country which has long been considered as an origin which only produces volume. The State of Espirito Santo is well and truly proving otherwise and it is symbolically in this state, at the foot of a majestic mountain called Pedra Azul, that this 18th edition of the CoE took place. For the history books, the state of Espirito Santo is the largest producer of Robusta. Thanks to its cold and wet micro-climate, the mountains of Espirito Santo have always been seen as regions which produce the country's worst quality coffee. These mountains are nevertheless high (with peaks of between 1200 and 1500m), allowing producers who are able to deal with the unpredictable weather to produce rare gems. Today they are building temperature- and humidity-controlled greenhouses to dry the coffee. In this Capixaba* region, the harvest is late, taking place from October to December, thus excluding a wide range of coffees from the CoE which happens in mid-October. In future editions, the dates of the competition must be reviewed so as to include all coffees from this fabulous region which will surely change the face of the context once again.

Gabriela with other judges of the Cup of Excellence 2017

Gabriela, for the Belco team

*Capixaba: meaning from the region of Espirito Santo
share