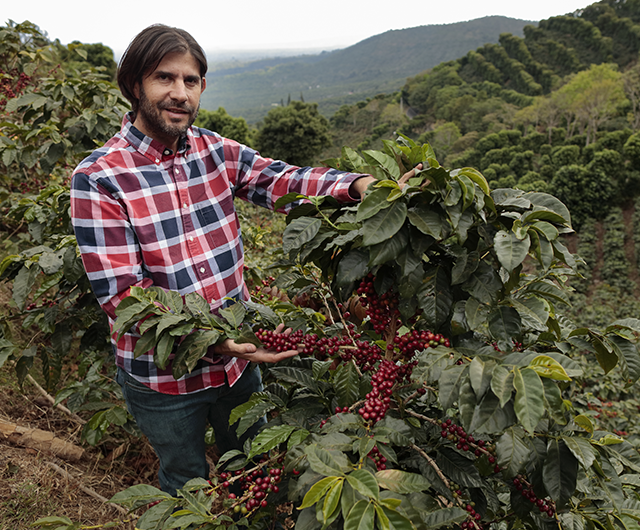 Interview with our producers

Last February, we were at Emilio's farm and mill in El Manzano, on the foothills of the Ilamatepec volcano. We took advantage of our visit to ask him some questions about his farm and his relationship with Belco.
Hello Emilio, can you introduce yourself in a few words?
My name is Emilio López Díaz, and I am the Executive Director of Cuatro M, the coffee supplier of BELCO for which we are making the visit of El Manzano, Ayutepeque, San Jorge and La Cumbre today.

Can you tell me a little about the farms that are producing coffee for Belco?
There are currently three farms from our group that provide coffee to BELCO, one is called La Cumbre. La Cumbre is located from 1500 to 1550 meters above sea level. El Manzano is also located from 1300 to 1550 and then Ayutepeque is from 1000 to 1100 meters high. The three farms are located in the Department of Santa Ana, in the Municipality of Chalchuapa.

And could you tell me a little about the coffee varieties you have in the farms?
We currently have about twelve varieties already planted in medium to large parcels which are already in full production. There are three types of Bourbon: Red Bourbon, Yellow Bourbon and Orange Bourbon. We also have the Pacas, the Pacamara, the Caturra, the Geisha, and the SL34 which is a variety from Kenya as well as a variety called Acayá which is a Brazilian variety. Those are basically the ones we have, the rest is experimental. We have three different lines of Ethiopians that are commonly called Heirloom. They could be said to be native varieties, they don't even have a variety name, they are only known as Ethiopians and from a certain region.

How the relationship with BELCO started, for how long you have been working with us and what it has meant to you as a producer?
Cuatro M’s relationship with BELCO started about six or seven years ago. I believe that the first years we sold them about twenty bags, which is a very little quantity of coffee. It was a curiosity. I believe that BELCO at that time also did not sell much Salvadoran coffee and then they gave us and another producer here in El Salvador the opportunity to be the first, those who would carry the Salvadoran coffee flag to Europe.
And since then, the first year, again, we sold about twenty bags, the second year they were about a hundred, the third year was a complete container, the fourth were three containers and it went up like this little by little. So, for us it has been a strategic partner, a very important partner, a very important ally, indeed, for our growth also as a company.

How does it feel like as a producer to know that your coffee is in Europe?
Well, this is really what I started to discover about thirteen years ago, when for the first time I arrived at a coffee shop, I was then in San Francisco and I managed to drink a coffee from my own farm, cultivated by us, in another country, in a coffee shop. Nowadays, although that is a little more common for us to be able to do it, that is still our goal : being able to bring what we produce with so much effort, to many people in other countries who will be able to taste it in cafes, in restaurants or in hotels. I've been once to a two Michelin stars restaurant and there I could drink my coffee and talk to the chef and with some customers of the restaurant about the product that I produced. In Europe it is a little bit different, and specifically in France, because they have a relationship to wine. Then for a French consumer and especially in Bordeaux where BELCO is located, the respect and understanding of the customer/consumer or even of a wine producer towards a coffee producer is quite clear and evident. There I really feel that the coffee producer is well respected.

It is a pride for you, I imagine, to be there representing before the world the product that is made here.
Yes, the truth is that our little country has a lot of problems, but unfortunately it has been only and exclusively because of the people who have governed us. But apart from this we have very special products, a very special land, and we have very special people and that's what other places really appreciate and what really stands out because our quality regarding the coffee product could be said to be constant, consistent and very much desired. It is also among the best five or six countries in the world, where we could put Ethiopia, Kenya, Panama, perhaps Guatemala, Colombia, El Salvador.

It is an exclusive group.
Curiously, although we are the smallest country in all of America, nobody else has the diversity of flavors, of micro climates and micro regions, no other country has it. Guatemala does because they have specialized in each microregion, and they also have a very important diversity. But despite our size we have something quite important that many country are looking for, that on one side of the mountain, from Apaneca to here where we are in Las Cruces, Santa Ana, or in Las Cruzes, Chalchuapa, you have a completely different coffee.

One more question, apart from the commercial relationship with Belco, is there any other kind of relationship that you have with us?
First of all, Belco is a dynamic company, it is a young, open, transparent company that believes a lot in the producer and that supports him and that has really given us opportunities and has offered us the market. So, regardless of any friendship we might have had or might have developed, with some of the people who are in Belco, who are Salvadorans for some of them, what makes our relationship strong is that both companies, both ours and Belco share almost the same values and the same vision : to be dynamic, to be open to change and always be proposing new things and that is what keeps us going together and what keeps the relationship between us strong.

Quality & consistency is one of the most important things for Belco. How do you notice it concretly?
I think the most important thing is consistency, more important than quality. Because I can produce ten bags of one of the best coffee in El Salvador, but if the other year I can't produce it again... It doesn't help me to win the lottery one year when I'm not able to meet the same quality standards again next year. Of course, in our country we know that we have quality, but who can really have it every year and fulfill the contracts without losing face?
For this, you have to be reliable. And to be reliable in the coffee business is to be able not only to fulfill the client’s needs, but also to be able to have a plan B. What happens if you didn't satisfy me? What are you going to do? How are you going to meet my expectations? Because you have to meet the needs in terms of quality but also in terms of volume, transparency, in terms of many things apart from quality, quality being the necessary basis. To be able to provide every year everything that comes in addition to the quality, that is the key.

Interview by Oscar Leiva, for Belco