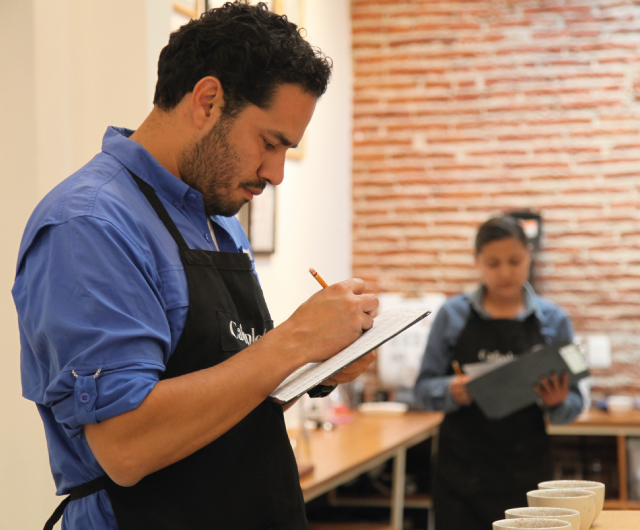 El Cafeólogo is one of those partners who have marked my life as a green coffee sourcer. Originally philosopher and doctor, Jesús Salazar develops coffees of excellence with small coffee farmers belonging to the Maya community from San Cristóbal de las Casas, in Chiapas, Mexico. His coffees arriving very soon at Belco, I invite you to follow the human adventure that allows us to offer these incredible coffees.

Life is a series of encounters, it’s true. Encounters made memorable by the people we meet. Last February, in San Cristobal de Las Casas in Mexico, I had the chance to meet someone in the coffee industry who is truly inspiring, on both a personal and professional level.

After several unsuccessful trips, I honestly believed I would never find the level of quality I was looking for in Mexico, my search had almost become an act of faith. Luckily Jesus crossed my path at just the right time to prove the opposite! Jesus Salazar Velasco, the Mexican Cafeologo.

Not only did El Cafeologo prove me wrong by welcoming me with an ordinary table of extraordinary coffees on my first day (despite having nothing to prove), but he also made me understood that the reason why these cups are so rare in his country is not because of the terroir, but because the producers have been abandoned by the national institutions managing the industry (some have even been disbanded), leaving the place open to essentially large multinationals with no interest in Mexican coffees but purely coffee as a “commodity”.

As soon as these producers receive support to improve the quality of their processes and production, however, their terroirs reveal some quite frankly impressive qualities. During my second day with Jesus, on the way to Tenejapa, I asked him if he bought coffee only in Chiapas, to which he immediately replied, “I don’t buy coffee”. He explained that he was more of a developer, and that he only develops coffee in the terroirs of Chiapas situated no more than one hour from San Cristobal. “I don’t believe in development without human contact, and it would be humanly impossible for me to continue as conscientiously as I have until now if the farmers were any further away.”

Having now visited the Mexican landscapes, it’s easy to understand what he means; Jesus is welcomed in regions where even the government cannot go, where the language spoken is not Spanish, and yet he is received by these producers as one of their own. “I think I’m doing a good job, even the coyotes (intermediaries) are asking to work with me,” he said. With these words, Jesus reveals another aspect of his personality in addition to that of engineer and roaster (he began as a roaster), which is his desire to work with people, a way of working that is easily understood when you learn that before becoming El Cafeologo Jesus was a doctor and a philosopher.

Once again, this rich human encounter, not only with Jesus but with all the producers from the various terroirs, revealed some exceptional coffees, of a quality surpassed only by the quality of the stories behind them.

For this first year, we have chosen small producers producing lots of no more than 5 or 10 bags maximum, but with the aim, as forest coffee lovers, to develop a coffee in our terroir range, because in Mexico, and more particularly in Chiapas, coffees are also grown under the shade of endemic forests, just like in Ethiopia.

These coffees could not be delivered before the end of September – but before giving your sales rep a hard time for delivering so late, bear in mind that these coffees grow at altitudes that can exceed 2,000 metres, and that some are not fully harvested before the end of May. Much of our stock was sold during our event 'Coffee en Primeurs", but there are still some lots left, so don’t hesitate to ask us for samples!

Angel, for the Belco team.

Jesus initiated his project "Cafeologia" in 2010. "Cafeologia" brings together a coffee shop, a hotel, a quality lab, a cupping room, a roaster, a warehouse and a small factory. A 360 vision of coffee, involving a value-creating coffee growing for producing Mayan communities, processing (Jesus is Q-processor), roasting, cupping and tasting thanks his coffee shop dedicated to the local market.
In 2010, Jesus started working with 4 farmers and today he collaborates directly with 35 "micro-producers".