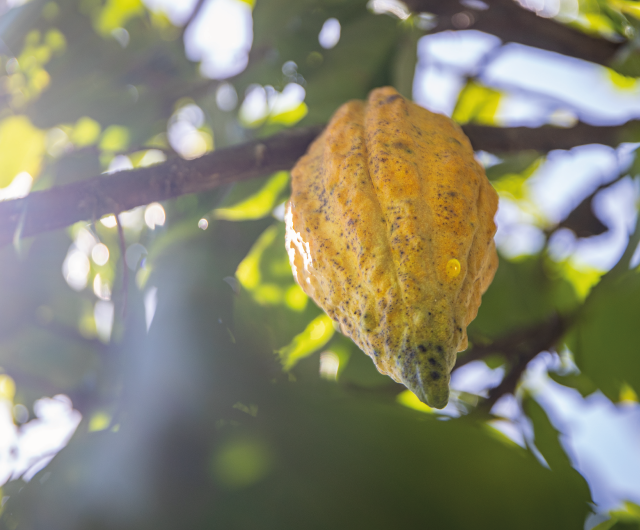 Amidst volcanoes, storms and conflicts, Salvadoran cacao is making a comeback.

Cacao and chocolate are an integral part of El Salvador's history and date back to its beginnings. Already present in Mayan mythology in pre-Hispanic times, cacao was not only consumed, it was domesticated.
Three thousand years ago, cacao was used in the preparation of drinks consumed during traditional rituals, but it was also used as a currency. This historical fact reinforces the importance of cacao in Salvadoran culture.
El Salvador has never been a reference for mass production, as its size and geography have made the highlands of the volcanoes more suitable for growing other crops, such as coffee. It is one of the smallest countries in the Americas with only 21,041 km² of land, but it is definitely an origin to be seriously considered when looking at the future of specialty cacao.
In 1575, historical records indicate that 1420 tonnes of cacao were exported from El Salvador to Mexico and then from Mexico to Spain. Even if current projections are realized, it will take several years to recover the volume of the past.
In 2022, according to the Salvadoran Ministry of Agriculture, cacao production will be concentrated mainly in two regions: Sonsonate and Usulután. However, the whole of the Pacific coastal zone has great potential and cacao farming is developing despite adverse elements, such as climate change and complex social situations.

While Central America is one of the most water-abundant regions in the world (with 23,000 m3 per capita/year), it faces problems of water availability and quality. It is therefore essential to protect the water recharge areas located mostly in the high parts of the volcanoes. The low-lying plateaus are devoted to conventional agriculture, such as sugarcane monoculture, livestock farming and the constant development of urban areas, which are also one of the main vectors of water stress.
Cacao requires a lot of humidity and can therefore rely on irrigation systems during dry seasons wich in El Salvador is 6 months per year.
Agroforestry farming offers a wide range of environmental benefits. For example, it ensures soil fertility, protects crops from wind and sun, restores depleted soils, maintains coolness and humidity & improves water conservation.

"We source cacao produced in agroforestry system to protect biodiversity and water sources." 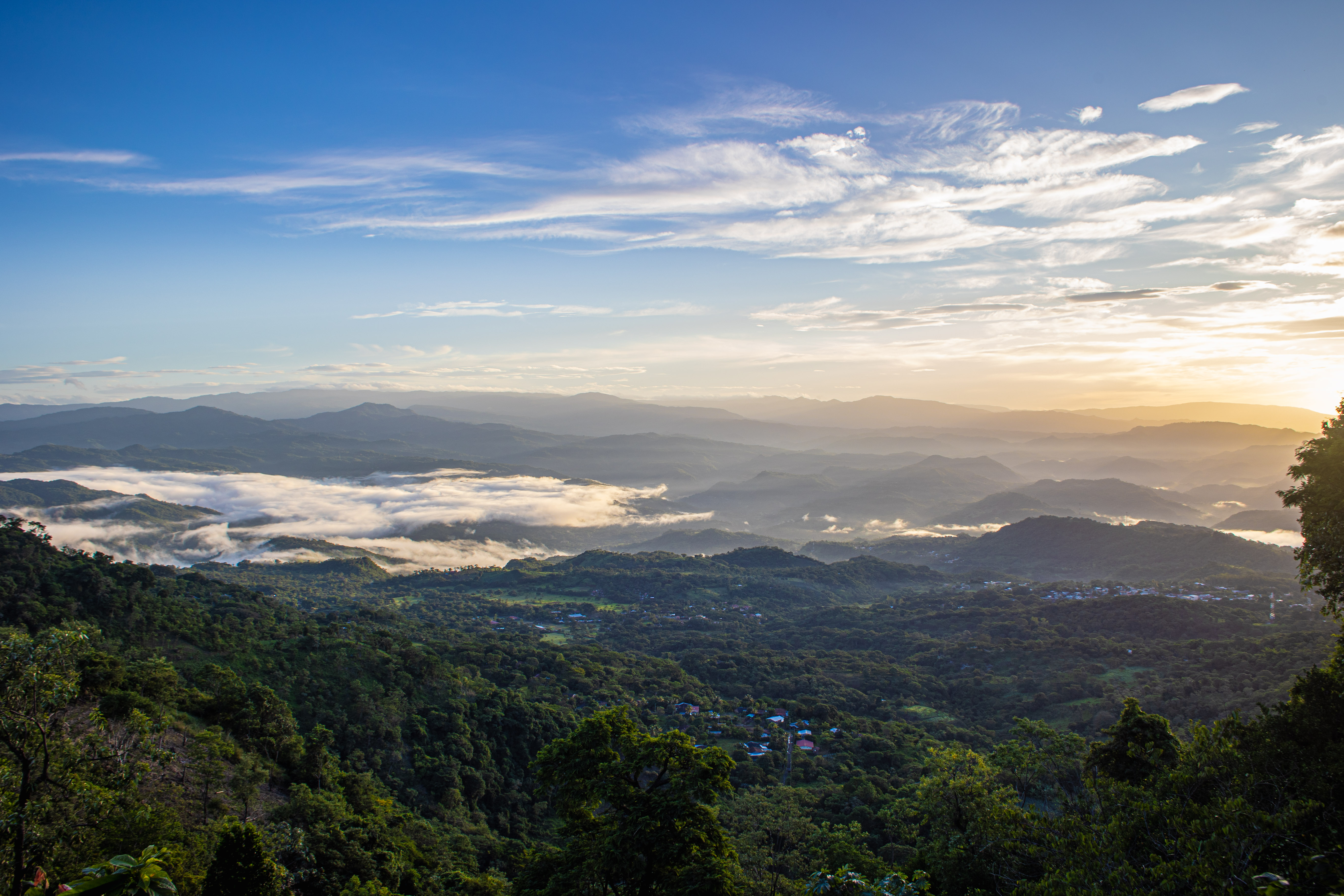 Here in Morazàn, the difference (especially during the rainy season) between the light green of sugar cane cultivation and cattle grazing contrasts with the lushness of the tropical forests, which offer ideal conditions for growing cacao.

According to "Alianza Cacao" (an NGO that supports cacao farmers by providing them a professional support in production and sales), El Salvador produced around 200 tonnes of cacao in 2020, and 500 tonnes in 2021. By the end of 2022, production is estimated at 900 tonnes of dry cocoa and 1,500 tonnes in 2024.
This development aims to meet the growing demand of the local market and these production increase forecasts correspond to good farming practices management and to the productive age at which the youngest crops are entering.
There are projected advantages for domestic production, but the price of imported cacao is a constraint that Salvadoran producers must take into account in their finances.

In El Salvador, you drink chocolate!

2021 : To meet its domestic demand of about 1,200 tonnes per year, El Salvador must rely on production from Nicaragua and Honduras to supply beans for the manufacture of "tablillas". We estimate that 80% of the cacao consumed in El Salvador comes from Nicaragua. 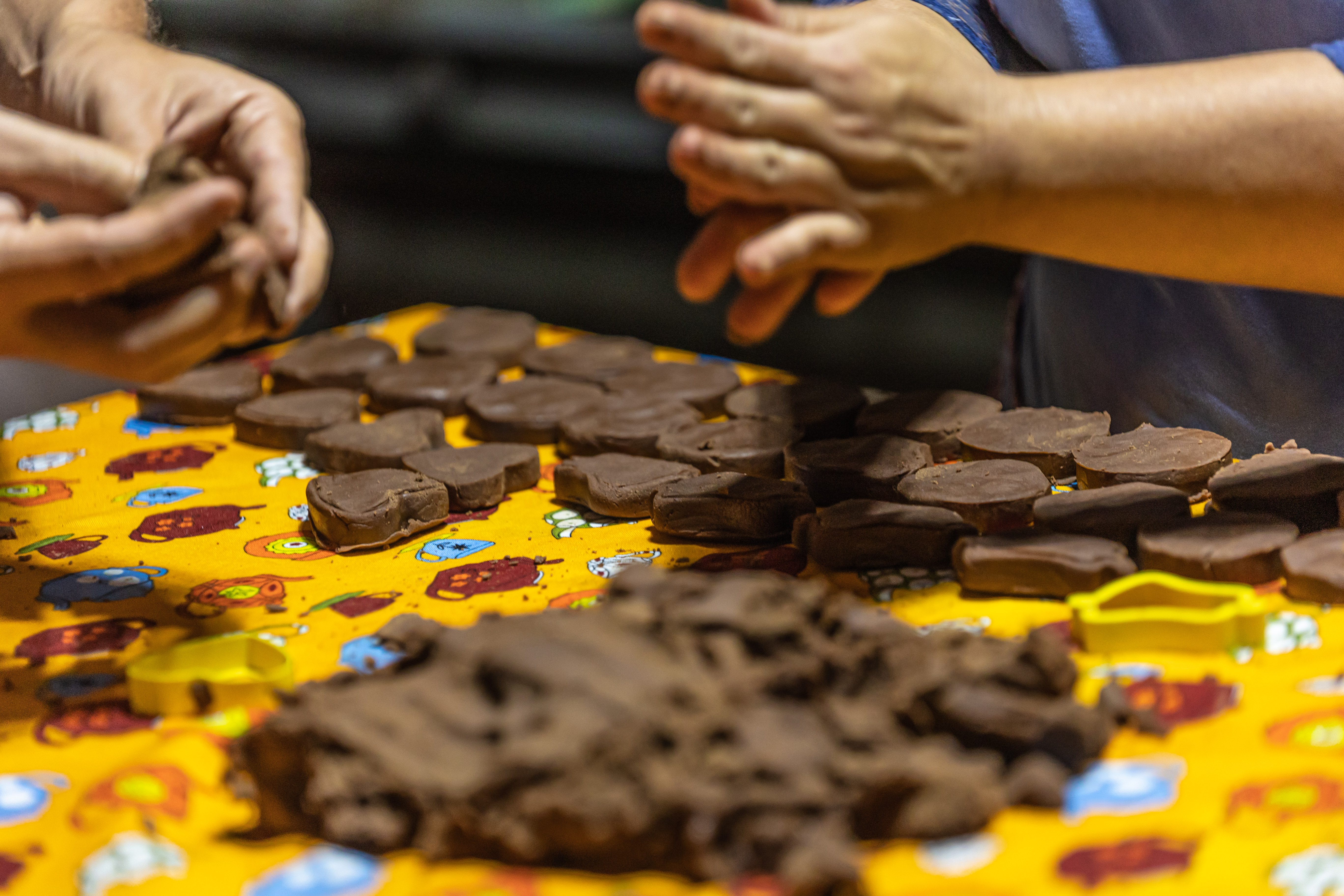 Tablillas are chocolate discs made of 70% sugar, 29% cacao and 1% spices such as cinnamon, cloves or green pepper. They are diluted in water to become a tasty drink that Salvadorans love.

Thanks to subsidies, subsidised loans and, let's face it, lower farm wages, producing cacao in Nicaragua is cheaper overall.
The consumption of Nicaraguan cacao is so high in El Salvador that it affects both the market and the quality, pushing local producers to adapt.
There is very little quality control on the Nicaraguan cacao that enters tablilla's factories, which are made in El Salvador. For example, let's go back to the farms. After the selective harvesting of the pods, one of the most important post-harvest parameters to guarantee the quality of a cacao is the fermentation of the bean. This complex process takes about 6 days during which the beans are fermented in wooden boxes. This stage is essential for the cacao to develop its aromas and reduce its astringency.
The fermentation rate rarely exceeds 40%, whereas for speciality cacao, protocol requires at least 70%. 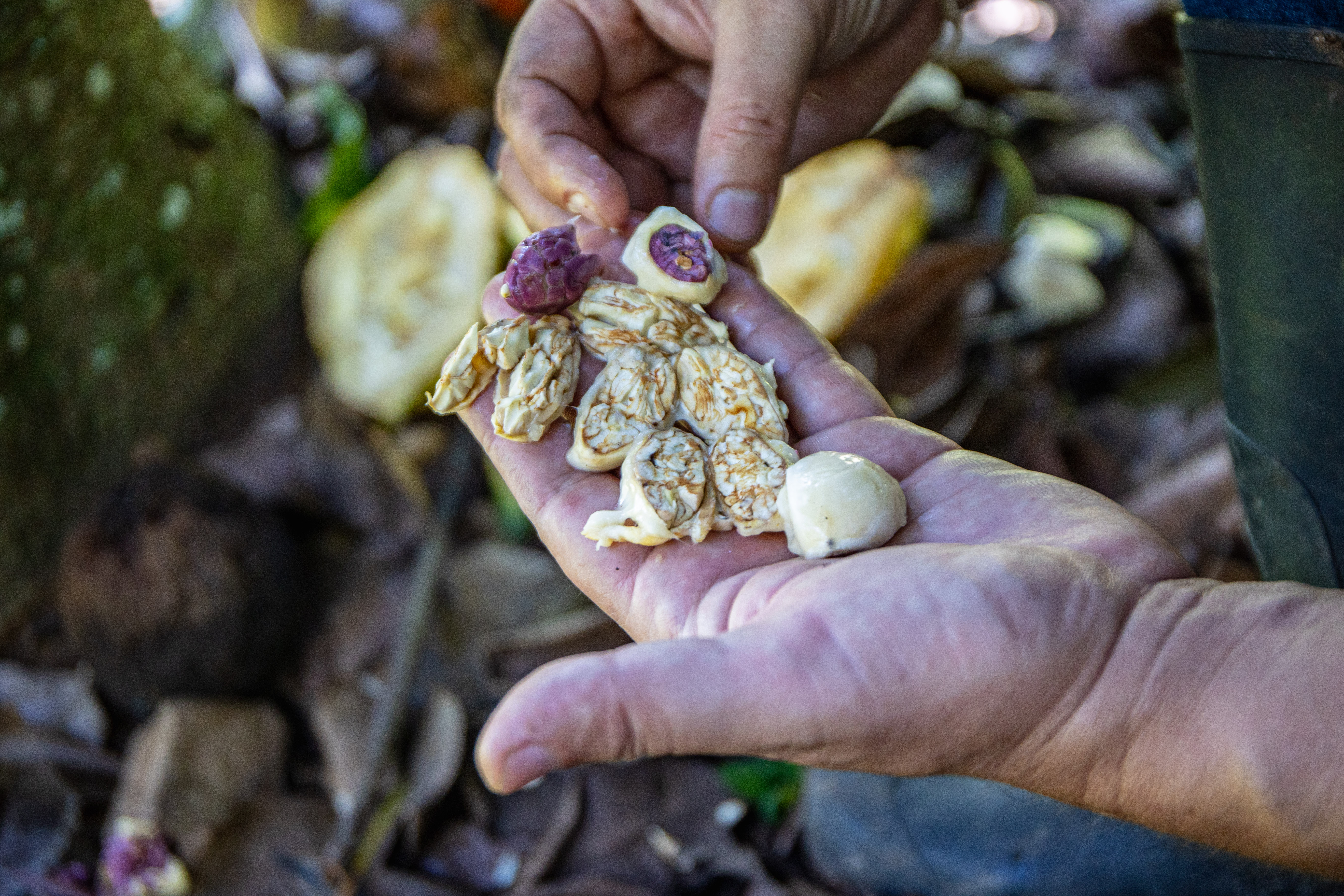 "Baba": a white, viscous and cottony pulp that coats the beans and plays a major role in fermentation.

Salvadoran farmers, who have been working in cacao farming for more than 8 years, are striving to implement precise and rigorous fermentation and drying processes in order to discover the complexity of the sensory profiles. For these farmers, the national market is increasingly limited and export is becoming a new outlet.
Cacao production in Nicaragua is also influenced by European chocolate makers. Ritter Sport is one of the largest German chocolate makers and Germany, with 430,000 tonnes of cacao per year, is the second largest importer of cacao in Europe, just behind the Netherlands. Ritter has such a strong influence in the cacao industry in Nicaragua that it sets the prices paid to producers and this price is used as a reference price by exporters of speciality cacao who base their prices on the price paid by Ritter for baba (unfermented cacao in its mucilage).  "Ritter+..." is used to explain the differential price paid to value higher quality cacao.
A large part of the lower quality cacao stays in the local market or leaves for the Salvador, where it is in great demand.
Nicaraguan cacao is transported to El Salvador via intermediaries, who are generally opportunists they are called "acarreadores" in the local markets. This name refers to a species of coyote. The acarreadores sell the cacao directly to the tablilla manufacturers, some of them consume up to 15 tonnes per month in order to produce affordable chocolate for the vast majority of the Salvadoran population who live on minimum wage and in a complicated economic reality.

Thanks to the actions of Alianza Cacao and the growing number of Bean-to-bar artisans in El Salvador, a group of producers has begun to adopt more demanding farming practices in the production of fine cacao which are a reference of quality.
In Europe, Belco works with actors who want to be involved in the sourcing, generally artisanal chocolate makers who want to enhance the value of the chain, know the impact of their purchases, participate in a virtuous cycle of remuneration for producers and support production practices that meet the challenges of preserving biodiversity.
These are fundamental aspects of our sourcing approach. 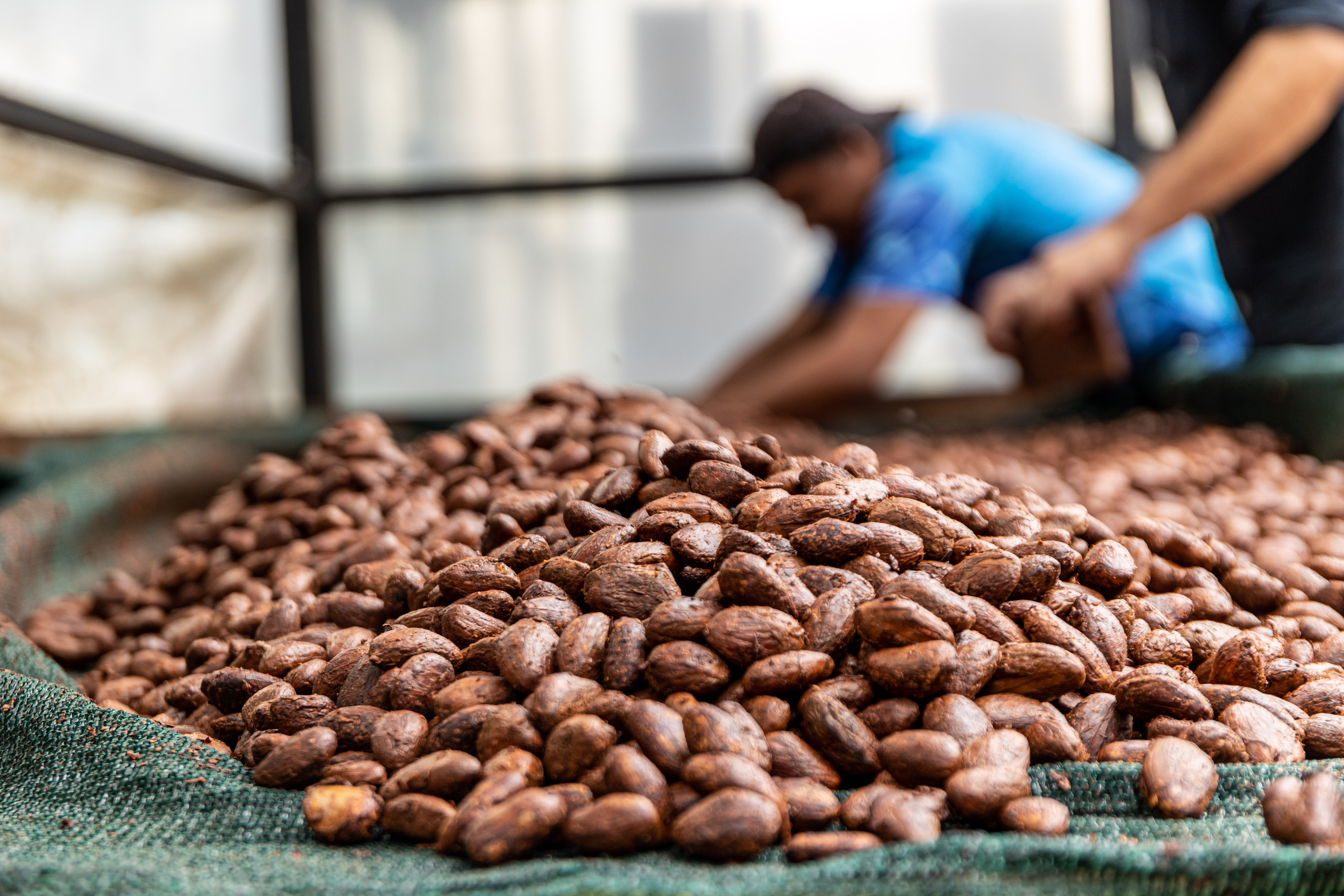 An example of the rigorous drying process on Elmer Martinez' farm in Morazàn, northwestern El Salvador. The beans are turned every half hour to ensure a uniform drying process.

A few years ago, when we started our relationship with the producers, we shared our quest for quality. We knew that there would be a time to adapt and a need for follow-up for continuous improvement.  We have to build and develop together, producers and sourcer.
We have succeeded in bringing these producers on board and have created precise specifications coupled with a lot of analyses (chemical residues, heavy metals, moisture, mould, fermentation, physical defects), as well as impeccable packaging requirements for the export of the beans. Of course, these criteria make the production of cacao more complex for the producer, we are aware of this and that is why our purchase prices reflect this work. We pay three times more for these cacao beans than for the "washed" cacao (with little or no fermentation), which cost around €1.30/kg in Nicaragua, Honduras or even in El Salvador. 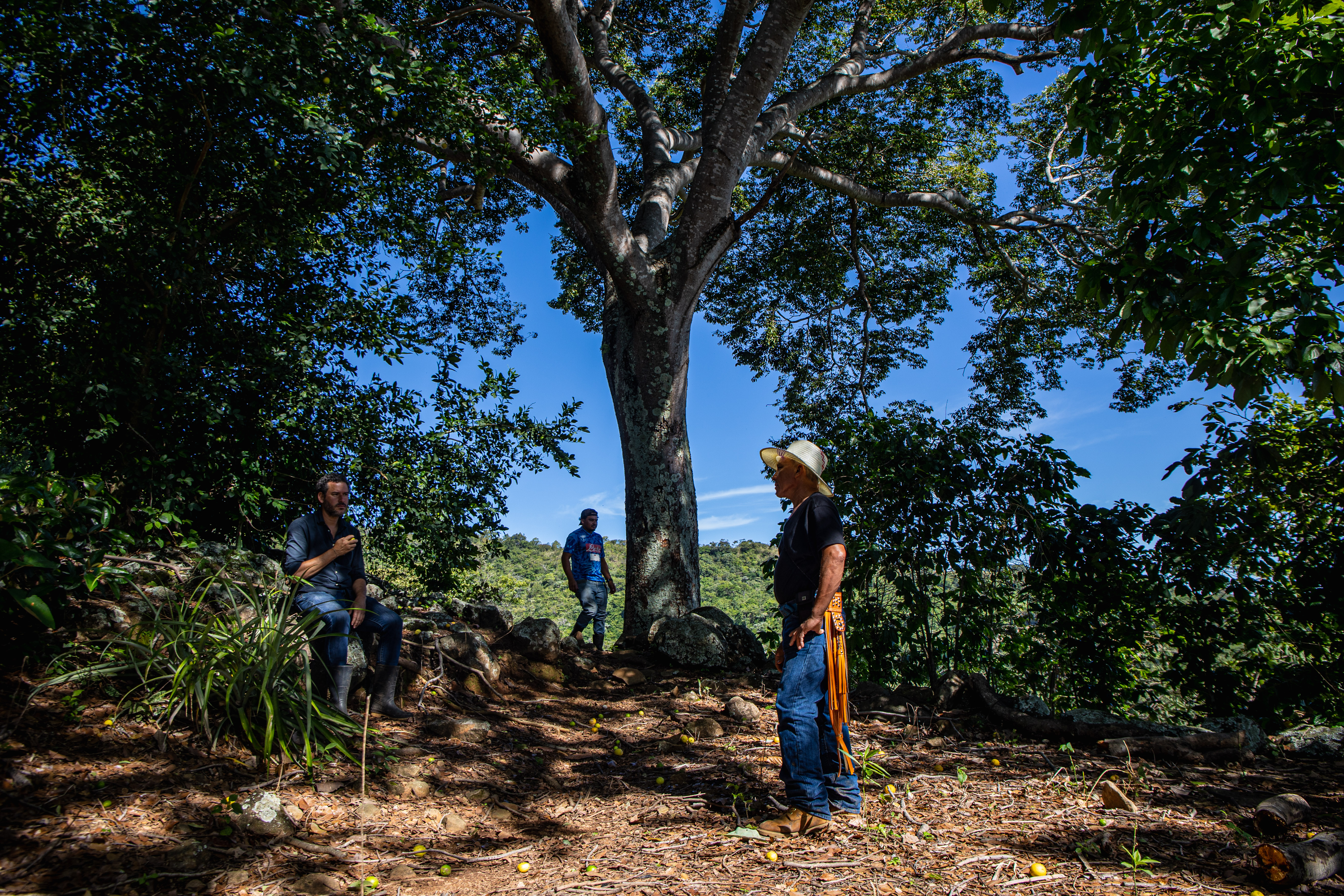 It is clear that there are many more cacao farmers who produce for passion than for economic reasons. These producers find in Belco an ally to access new markets beyond the borders of El Salvador.
Our goal for 2023 is to source 25 tonnes of Salvadoran specialty cacao, while at the same time developing our sourcing in Colombia and progressively towards new origins.

"Belco believes in the social economy, we are working to open up the European market to Salvadoran producers, which will have the effect of opening up more sustainable options for their business model, enhancing their quality and ensuring that the efforts made to guarantee specific sensory profiles are appreciated by chocolate makers and end consumers."

Through long-term relationships, the benefit will not only be for the producers but also for their neighbouring communities by involving women and youths who participate in the harvest, but also throughout the year.
Paying a fair price for cacao, not a stock market price, makes it attractive and motivates the expansion of the growing areas. We must ensure that these areas will be agroforestry productions in polyculture, so that the environment will also receive a significant benefit.
share